One of the promising trends in the field of Earth remote sensing (ERS) is creation of space systems including swarms of heterogeneous spacecrafts and a wide network of geographically distributed data receiving and processing centers. With the growing sizes of such systems it has become an urgent task to determine when, at what time and how the spacecraft has to shoot a specified area of observation and to which of the data receiving points should it transmit the acquired information. It is necessary to take into account a number of limitations related to visibility and technical characteristics of spacecrafts and data receiving points.

In order to solve this problem the Swarm of Satellites system has been developed based on the multi-agent approach, in which the desired schedule is constructed via interaction of autonomous software objects — agents, for example, agents of spacecrafts, data receiving points and observations areas. All these agents make arrangements with each other about when and who will carry out operations of shooting, transmitting and receiving of information.

Swarm of Satellites user interfaces include nine screens and three terminals. All the control of system performance is carried out via terminals, while the screens are used to display the processes going on in the system as well as scheduling results.

Swarm of Satellites solves the task of managing the space ERS system through creation of self-organizing swarm of interacting intelligent agents that can plan their behavior in real time, ensuring consistency of their decisions. This approach makes it possible to achieve high scalability and flexibility in managing the space system, making it easier to enter new components into its structure.

The ability to adaptively change the constructed plan of space system performance can improve its mission effectiveness under conditions of dynamic entry of orders for surveying as well as occurrence of disruptive events related to meteorological conditions and equipment failures.

Independence of software agents in the long term makes it possible to place the planning components within the on-board computing devices of spacecrafts, thus eliminating the need for centralized scheduling and increasing efficiency of decision-making.

Swarm of Satellites can be applied in enterprises specializing in development and operation of groups of ERS satellites and using satellite data, which face the increasing consumer demands for information efficiency of Earth remote sensing:

Swarm of Satellites is an intelligent system for planning target operation of a group of spacecrafts for Earth remote sensing. It is based on multi-agent planning methods and means of uniting spacecraft target hardware into a single information space. The system provides adaptive distribution of tasks for sensing observation objects.

The system makes it possible to plan target application of large-sized groups of spacecrafts taking into account all the necessary limitations.

Swarm of Satellites can take into account dynamically occurring events, which include occurence of a new task or change of its parameters, failure of spacecrafts or means of communication, etc.

The result is a schedule of ERS spacecraft group operation for surveying target objects and delivering the data to end-users. 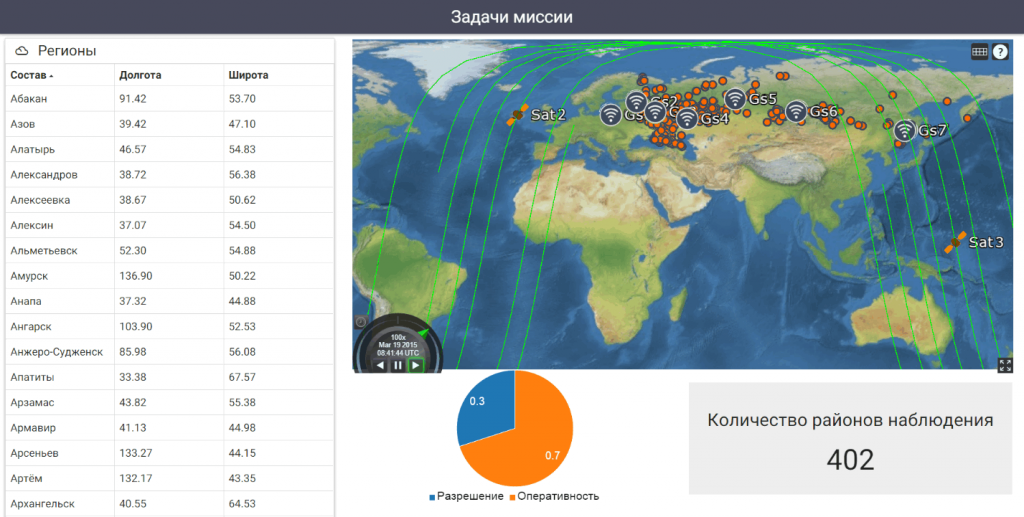 The «Mission Tasks» Screen shows the current target environment. The map shows the composition, location and number of observation areas. In addition, it shows the priorities of the criteria by which to assess the quality of the constructed schedules. So, at this point, takes into account two criteria: efficiency of information and resolution of images. As these criteria can contradict each other, using their convolution with predetermined weights. 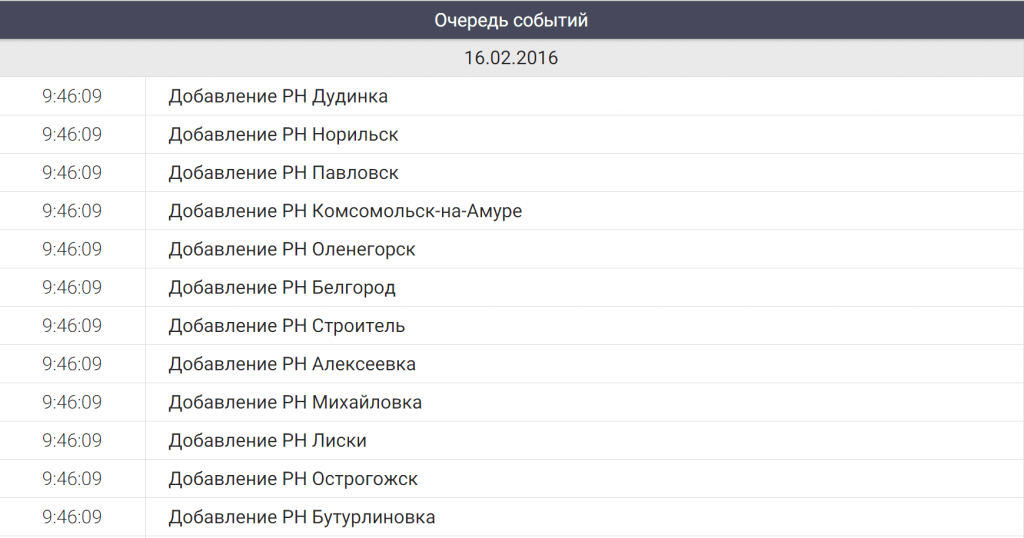 The «Event Queue» Screen shows a list of system events. Any change to the source data is considered by the system as an external event, whether it is the appearance of new applications for surveying, failure of the spacecraft or a break in the data received. All events are recorded on this screen in chronological order. 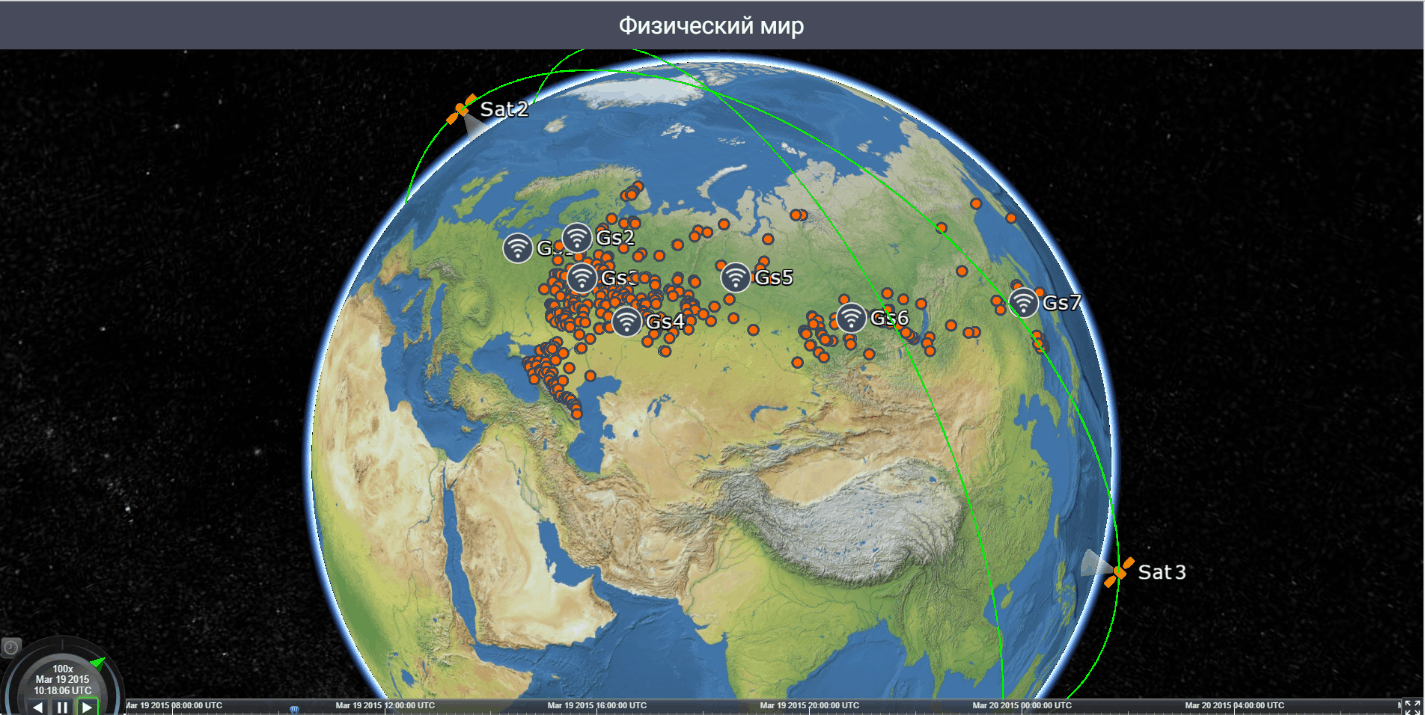 The «Physical World» Screen renders a 3D scene, which reflects all space vehicles, items receive information and observation areas involved in planning. On the surface of a three-dimensional globe designated areas of observation points and receive information. Around the globe shows the orbit and position of the spacecraft associated with the current model time.

The «Group Plan» Screen displays the selected spacecraft Action Plan. It shows the spacecraft visibility to all areas of information and points of acceptance, as well as the plan of operations for shooting and discharge information, built on ten days in advance. Furthermore, in order to limit memory for demonstration, there is shown a graph of filling the storage device. 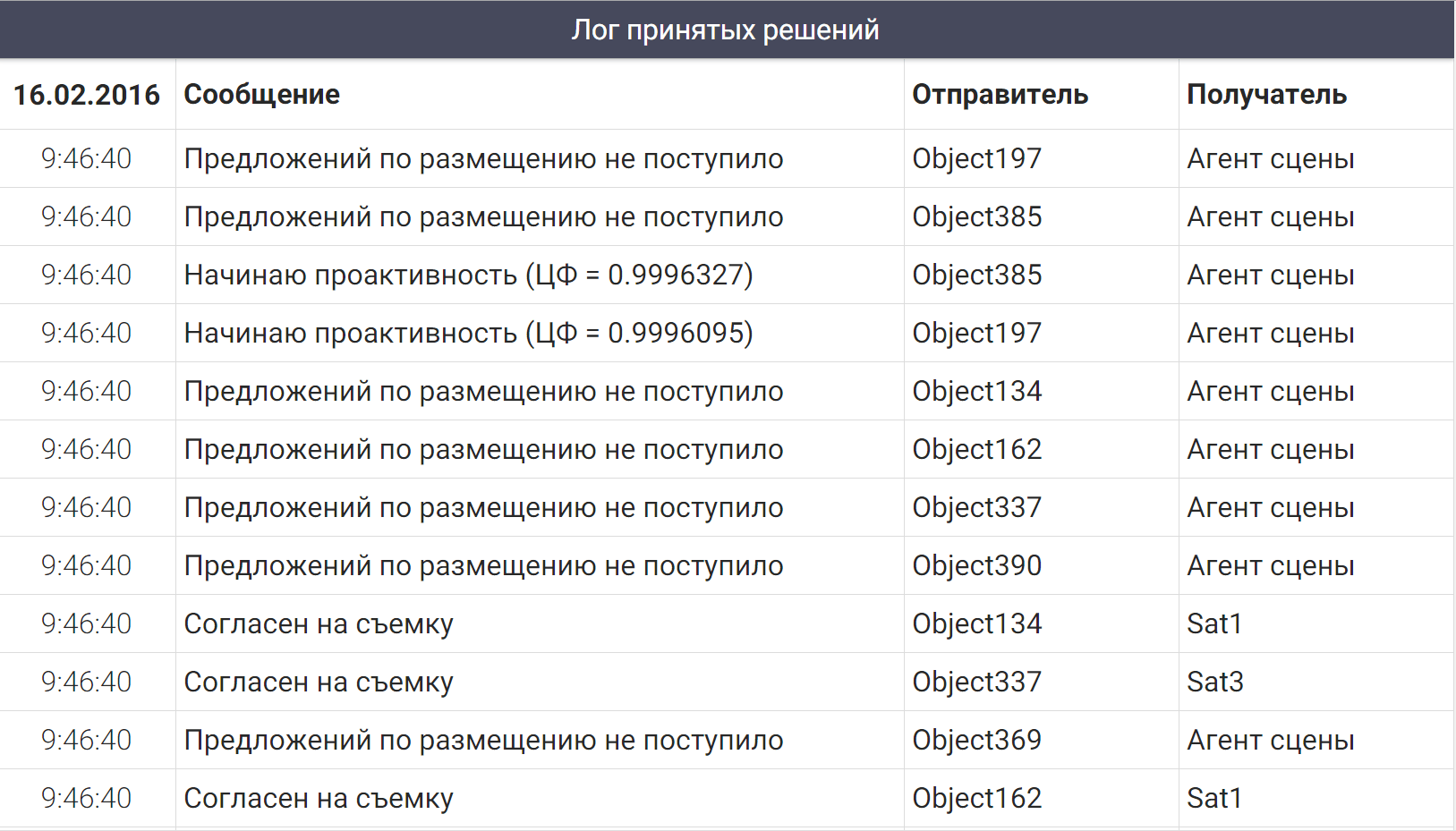 The «Decision Log» Screen in chronological order displays the messages exchanged between the agents in the process of building a schedule.

The «Mental World» Screen schematically shows the relationship between aligning agents spacecraft observation areas and data received during the construction schedule. Color corresponding to each agent mug the greener, the higher the value of its objective function.

Links are established between the areas of surveillance and spacecraft, when the area of observation is removed according to the spacecraft, and the areas of surveillance and data received, when a picture of the area cleared at this point for information. Ties are dynamically changed during the planning. All cooperating entities are grouped in the center of the screen, the rest of drifting to the periphery.

After formation of anew connection, observation areas change color to green and are drawn from the periphery to the center of the screen. After the end of the planning process entities are grouped more clearly reflecting the nature of relationships built.

The «Mission Results» Screen demonstrates the quality of the final performance schedule: the volume removed by each spacecraft and received by each data receiving point, percentage of planned and unplanned observation areas, as well as the average values of the considered criteria.

The «Performance Indicators» Screen contains a chart showing how the quality of the schedule in the planning process. Schedule is built iteratively agents. At the initial time no one never planned. Gradually agents districts observations agree with the spacecraft and receive points for placing the information on the first rising vacancies, and then, if possible, rearranging the prevailing schedule by mutual permutations and shifts. 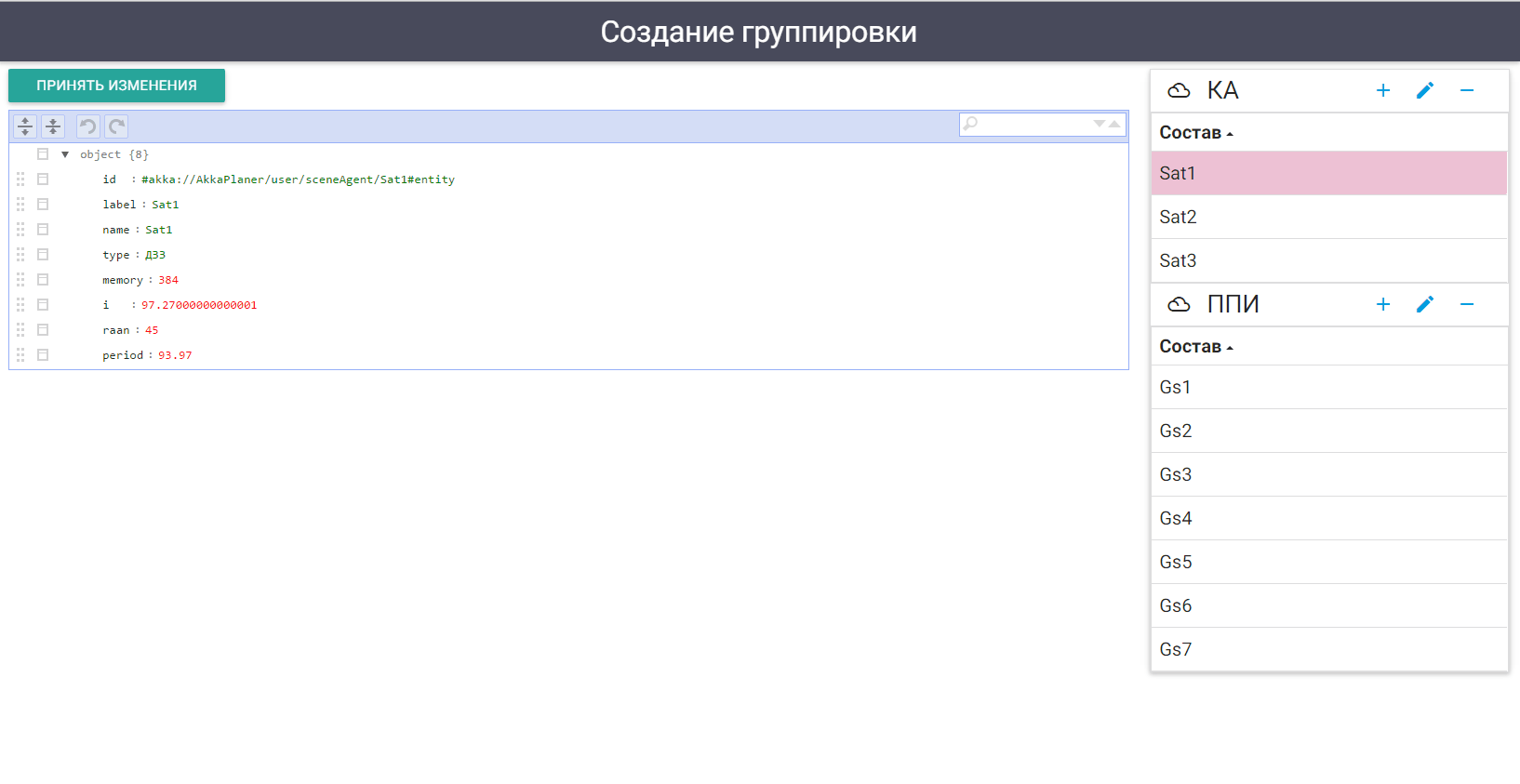 The «Group Creation» Terminal  is used to change the composition of groups and parameters of spacecraft and data received. You can change the amount of memory in the spacecraft, and any parameter in points prima information. 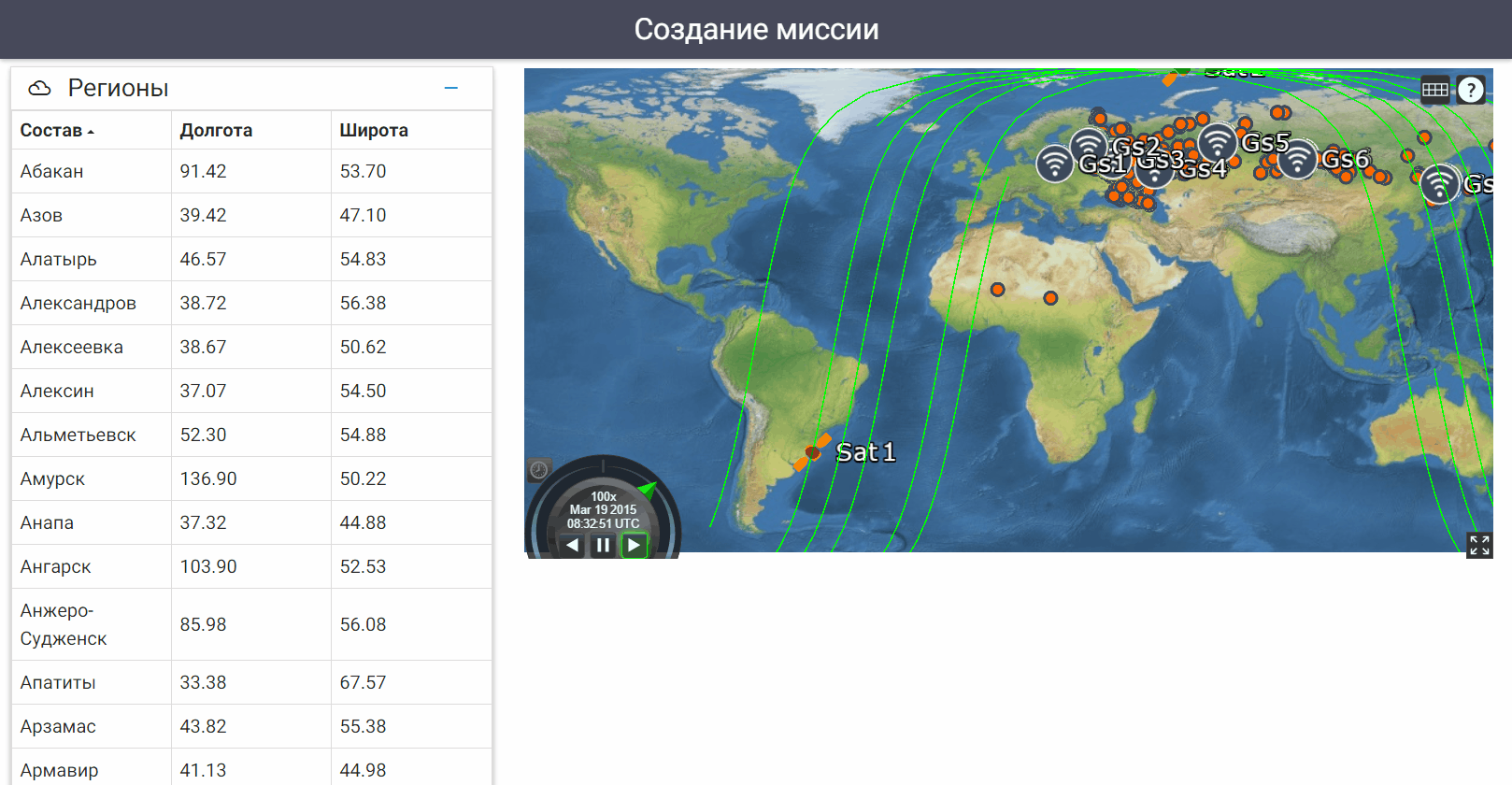 The «Mission Creation» Terminal is used to add and remove areas of observation. The process of adding the maximum surveillance simplified areas: the user need only specify the point on the map, and then the system automatically determines the coordinates and geographical name of the new area of observation.

Our publications on Swarm of Satellites (in English)

Our publications on Swarm of Satellites (in Russian)

Learn more about Swarm of Satellites